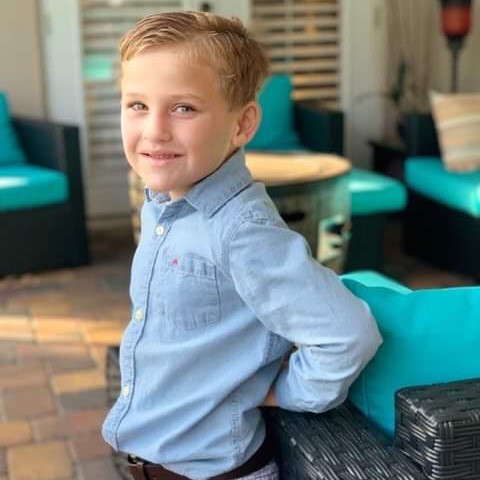 After enduring five heartbreaking miscarriages, Matt and Amy were overjoyed to hear they were pregnant and expecting healthy, twin boys. But just 21 weeks into the pregnancy, that excitement turned into anxiety when Amy was told she was at risk for pre-term labor.

Immediately admitted to Orlando Health Winnie Palmer Hospital for Women & Babies, Matt & Amy’s medical team hoped to delay labor and give the babies the best chance of survival. Sadly, their first son, Baby Brandon, was born just one week later at only 22 weeks into the pregnancy, alive, but too small to survive.

All of the focus was now on their second son, Baby Ashton, and on Amy’s birthday, Day 1 of the 23rd week of pregnancy, he was born. Weighing only 1 pound and 4 ounces, Ashton arrived on the earliest day considered viable for babies to survive. Treated in the Alexander Center for Neonatology at Orlando Health Winnie Palmer, Ashton was immediately intubated to receive oxygen and help him breathe.

The day Ashton was extubated was the first time Matt & Amy heard their son cry, which they describe as the most beautiful music to their ears. After 111 days, Baby Ashton had his oxygen line removed and began breathing 100% on his own. This was not the “expected” journey for a baby born at just 23 weeks, but Matt & Amy credit that miracle to the exceptional care Ashton received from his medical team – a team they believe loves their son as much as they do.

Today Ashton is in kindergarten, but when he’s not in school you can find him swimming in the pool, jumping on his trampoline, playing with his monster trucks and hot wheels, or spending the day at Disney!