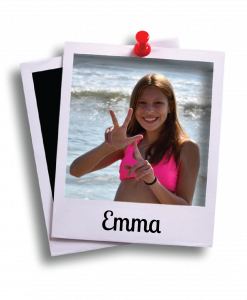 Emma was born in January of 2005 and immediately her parents knew something was wrong. Emma was transported to Orlando Health Arnold Palmer Hospital for Children for further testing. Doctors discovered that Emma had multiple heart defects. The primary defect is called Transposition of the Great Vessels. Emma’s pulmonary artery and aorta were switched and she was not receiving oxygen-rich blood; her heart circulated oxygen-depleted blood through her body.

To correct the problems Emma would require multiple open-heart surgeries over a number of years. At one week old Emma had her first heart surgery when her heart was the size of her tiny fist. In July 2005, at six months old, Emma had her second surgery which begin the process of redirecting blood flow through her heart.

In June 2008, at 3 ½ years old, Emma had her third corrective surgery. This was to be Emma’s last surgery for a number of years but there were complications during the procedure and in recovery. One major complication doctors discovered was that Emma’s body began rejecting Heparin. Blood test showed that Emma has a blood rare condition called Heparin Induced Thrombocytopenia which has only been found in a handful of children. It was also discovered that Emma had an aortic tear which had to be repaired with a fourth heart surgery just four weeks after her last procedure. After 37 days in the hospital Emma was finally well enough to go home with her parents, Chuck and Shannon along with younger brother Brandon.

Today Emma continues to defy the odds and is such a blessing to all who know her. Thanks to the staff at Orlando Health Arnold Palmer and the support of the Children’s Miracle Network Emma has the world at her fingertips.