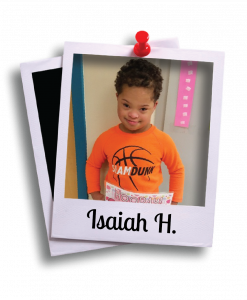 Isaiah was born three months prematurely at Orlando Health Winnie Palmer Hospital for Women and Babies, which became his home for the first five and a half months of his life. At birth, Isaiah weighed exactly one pound and was the length of his nurse’s hand. Isaiah was diagnosed with pulmonary hypertension, which causes respiratory complications. He also has cardiac problems, hearing loss, Down’s syndrome and disphagia, making it difficult for him to swallow.

While Isaiah’s health concerns bring necessary demands to his family, and it has been difficult, they are deeply thankful. His mother, Geri, says, “I think of Isaiah as a miracle. Watching him with his brother, Zion, is the best!” Despite their ten year age difference, they are closer than any pair of siblings. Although he has a long road ahead of him, thanks to his family, his doctors and his courage, Isaiah continues his progress and is truly a miracle.