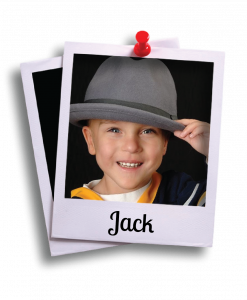 Finding out the gender of your baby is an exciting time. But on the day Jack’s parents learned they were expecting a baby boy, they also discovered that he had a severe heart defect. At a time that should have been filled with excitement Jack’s parents were told to prepare for the worst.

In an effort to save his mother’s life from rising blood pressure, Jack was delivered prematurely at 26 weeks weighing only 17 ounces. Although Jack’s doctors said he only had a 10% chance of survival, his parents felt blessed that he had been born alive and never gave up hope that he would continue to fight.

Today Jack enjoys being in school and playing ice hockey and tee ball with his friends. He may be small but he is full of life and has a BIG personality. Jack and his parents are grateful for the miracles that were made possible because of the support the hospitals receive from Children’s Miracle Network Hospitals.

Every day, Justice shows progress and her family is so thankful to the staff at Orlando Health Winnie Palmer and Children’s Miracle Network Hospitals for funds used to purchase the medical equipment that helped save and change her life in and out of the NICU.