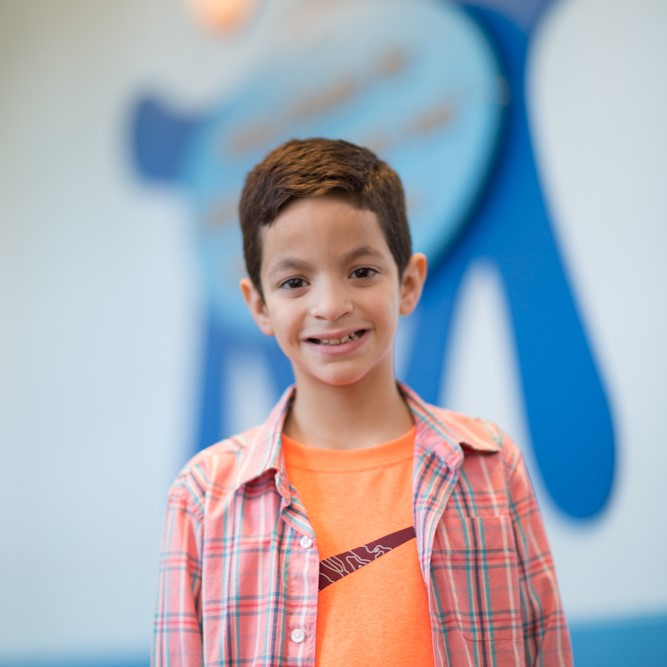 When JP was born, he could barely move, constantly slept and wasn’t eating regularly. It wasn’t until he was nine months old that he was able to hold his own head up, and that’s when doctors began to fear that JP would never be able to walk.

At the early age of 3 months old, JP was referred to specialists at The Howard Phillips Center for Children & Families, part of Orlando Health Arnold Palmer Hospital for Children, who recommended occupational and physical therapy. Just before his second birthday, JP was diagnosed with Potocki-Lupski Syndrome (PTLS), a very rare health condition caused by a duplication of a gene in chromosome 17. PTLS causes many of the complications that JP experienced, including his developmental delays, speech problems, low muscle tone, feeding difficulties, and many other conditions.

Thanks to the early intervention at The Howard Phillips Center and the continued care at Orlando Health Arnold Palmer, JP can walk, run and dance with his seven siblings. With the funds raised through Children’s Miracle Network partners, The Howard Phillips Center had the staff, technology and equipment to help him overcome challenges in his development. Today, JP continues to surpass all expectations. He runs, swims, and even dances. He enjoys being a part of Boy Scouts of America and loves performing on a stage. His smile and laughter brings joy to everyone he meets!