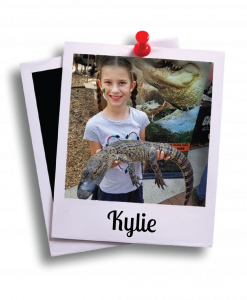 Kylie’s parents had just learned they were expecting a baby girl when a phone call one hour later changed everything. There were concerns about the baby’s heart and the doctors asked them to go to Orlando Health Winnie Palmer Hospital for Women & Babies immediately.

After a series of test, doctors discovered that only half of Kylie’s heart was developing properly and determined that she would need to undergo at least three open heart surgeries to help correct the problem once she was born.

When she was 20 days old, Kylie had her first heart surgery, followed by one more at six months old and her final surgery occurred just before she turned three. During these years she spent a lot of time at the hospital, and thanks to funds raised by Children’s Miracle Network Hospitals’, The Heart Center at Orlando Health Arnold Palmer Hospital for Children had the most advanced medical equipment to offer best in class care to help save Kylie’s life.

Today Kylie is doing remarkable. She loves coloring, riding her bike and pretending to be a princess.