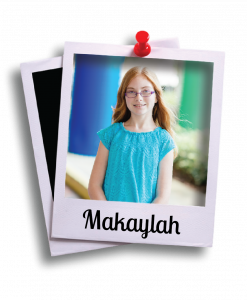 At three weeks old, Makaylah was admitted to Orlando Health Arnold Palmer Hospital for Children after she experienced difficulties drinking that caused her to struggle breathing, sometimes even turning blue. Doctors discovered severe reflux going into her lungs and performed her first major gastrointestinal surgery when she was four weeks old. To prevent reflux and to protect her lungs, Makaylah received all of her nutrition through a feeding tube for the first year of life.

Before she was two years old, she began experiencing life-threatening grand mal seizures which stopped her from breathing and Makaylah’s journey became one new diagnosis after another.

Overtime, Makaylah was treated for immunodeficiency, epilepsy, migraines, a GI motility disorder, obstructive airway disease, osteoporosis, a cyst in her brain, and muscle weakness – just to name a few. She was ultimately diagnosed with a mitochondrial disease – a diagnosis that finally pulled all of her medical complications together.

Despite the internal battle that she faces, Makaylah is a typical teenager who loves to swim and ride her bike.  She is still on a path of balancing all of her health issues and fighting through the struggles, but she is thriving! From the Child Life program that keeps her spirits high when she is in the hospital, to the Critical Care transport team that intervened early on, donations from Children’s Miracle Network to Orlando Health Arnold Palmer have had a direct impact on the quality of care Makaylah has received and on how well she is doing today.