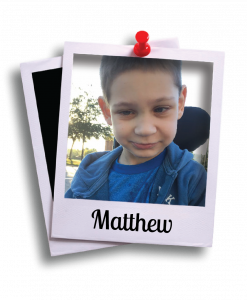 In the five years since his original diagnosis, he now also battles a hearing impairment and has been diagnosed with Cerebral Palsy, Autism Spectrum Disorder, Cortical Visual Impairment, and he is unable to talk. Due to nature of his complex conditions, Orlando Health Arnold Palmer has become a second home to him and his family to receive specialized care on many occasions. Despite this, Matthew is still a happy boy who loves Ninja Turtles!