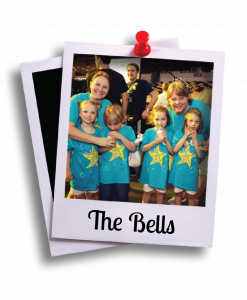 Jenn and Carrie had known that they had wanted a family from the day they met and started to try with the help of doctors because of being a same sex couple. After a couple of years of and having to take high dose fertility drugs, they decided to try one last time for “a” baby and sure enough Carrie became pregnant. A few months into the pregnancy Carrie went in for a routine ultrasound appointment and that’s when the doctors told her that she was carrying not just “a” baby but FOUR babies. Her pregnancy immediately became high risk.
At 21 weeks pregnant, Carrie went in for another appointment and was told that she was dilated and would have to be admitted to Orlando Health Winnie Palmer Hospital for Women and Babies on strict bed rest until the babies were born. Carrie spent six weeks at Orlando Health Winnie Palmer and on March 29, 2012 she gave birth to the “quad squad.” At 2:12am Sophia Grace was born, followed by Olivia Hope at 2:14, Emily Faith at 2:16, and Noah Robert at 2:18. Each weighing less than 2 lbs at birth, the babies were immediately rushed to the NICU because they could not yet breathe on their own. Carrie said they were so tiny at the time of birth that she could fit them in the palm of her hands. After 3 months in the NICU and continuing to grow and develop, Sophia was strong enough to be able to go home. A few weeks later Noah was able to come home accompanied by an oxygen tank. Emily and Olivia remained at the hospital for a few weeks after as they needed to be treated for congenital heart defects at Orlando Health Arnold Palmer Hospital for Children. Emily came home after 4 months and Olivia came home at almost 5 months. Carrie said there were tears in her eyes when they finally took Olivia home because not only were they finally being able to go home as a family, but they were also saying goodbye to Orlando Health Arnold Palmer Medical Center, a place that they called home for nearly seven months. They still have periodic check in appointments with their doctors at Orlando Health Arnold Palmer and Noah has shown signs of having Autism Spectrum Disorder, even though he has not yet been officially diagnosed.
Today, they are now four happy, healthy kids who are full of life. “And like thousands of other miracles, these four wouldn’t be here if it wasn’t for the amazing people doctors, nurses, security guards, and other staff at Arnold Palmer & Winnie Palmer Hospital” – Carrie Bell.